Home
See
Table of Contents
for articles
listed by topic

Using Web 2.0 Applications to Support a Political Cause: Myanmar as an Ongoing Case Study 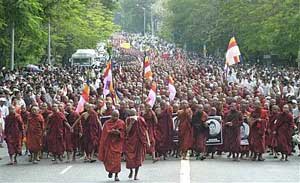 Web 2.0 has not only revolutionized human interactions, it is also altering
the way political causes are supported and promoted. The ongoing response to the 2007 crackdown on the protesting monks in Myanmar provides a vivid illustration of how Web 2.0 applications are being used in the international arena.

Myanmar, previously known as Burma, has long been ruled by a military regime which has whittled away Myanmar’s rich resources through incompetence and mismanagement. Despite internal challenges, it succeeded in keeing a tight lid on political dissent. However, beginning in February 2007, a series of protests arose in response to the country's worsening economic situation. This culminated in an estimated 20,000 monks and nuns, with an additional 30,000 supporters, taking part in a protest march in Yangon itself.

The march resulted in a brutal military crackdown, which sparked an information campaign by the protestors' supporters to ensure that the world learned about what was taking place in Myanmar, despite its controlled media and closed society.

WEB 2.0 AND THE MYANMAR SITUATION


As the drama unfolded, the Myanmese people, having no recourse to open and free media, turned to the Internet and began using Web 2.0 tools to publish and inform the world about the situation in their country. Together with news from foreign journalists in Myanmar, information about events in Myanmar was rapidly disseminated. Mainstream media and concerned individuals and groups disseminated the information, ensuring that the world community and its leaders were quickly apprised of the abuses taking place.

There was an exponential effect as both Myanmese and international efforts on the World Wide Web kept the information flowing, and continued to rally support. A plethora of Web 2.0 tools were used. (One article on the use of cell phones during the Myanmar Protests can be found on the wiki at Citizen journalism.)


Existing blog sites, which had already been campaigning for democracy in Myanmar, played their part, along with new sites that arose in response to the government brutality. These served not only to convey information but also to aggregate and contribute news. The following sites illustrate the number and range of resources available.


Wikis, where pages can be accessed and updated by readers with more information, include Wikipedia itself as well as sites like:


Folksonomies, in the form of social bookmarking, image and video tagging, were important toos for organizing information on related topics. Examples of these included Youtube, Flickr and Del.icio.us.

The power of the image was one of the most significant elements. Countless video clips and still images, taken by cellphones and sent out via the Internet or the cellphones themselves, were replicated and used in the various media. As an example, a group called US Campaign For Burma and Human Rights Action Center, http://www.youtube.com/user/uscampaignforburma included various messages posted by celebrities and campaigners, such as Jim Carrey [[http://www.youtube.com/watch?v=NySuaJ2B20E.|, seeking support from the international community for the Myanmese cause.


On Flickr, an example of a compilation of photo links on Myanmar related activities can be seen at:
http://www.flickr.com/search/?q=burma

An example from del.icio.us:
http://del.icio.us/search/?fr=del_icio_us&p=burma&type=all

The campaign for support for Myanmar extended to the virtual reality site Second Life as well. At http://secondlife.techsoup.org/node/154, players were encouraged to wear a red t-shirt and attend a virgil on Commonwealth Island. The image captures above show some of the Second Life support in action.


Social networking sites also played an important role in rallying people to the Myanmese cause. The best example was that of Facebook. Over 500 groups were set up to support the people of Myanmar. The most significant of these, "Support the Monk’s Protest in Burma," grew from 3,500 members on September 24, 2007, to 432,479 members as of October 24, 2007. Some groups ranged from several hundred to thousands of members, while the majority numbered less than a hundred. These and other sites caught the eye of mainstream newspapers and broadcast stations, which drew attention to their existence and their goals. The group acted as an online information and co-ordinating hub to rally those supporting the Mayanmese cause. As an open group, it allowed anyone to become a member. This link-rich environment provided information, linking to other news and blogsites, and served as a platform to announce protests and rallies to be organized in different locations, including Australia, Bulgaria and Costa Rica. It also listed companies that did business with Myanmar and advocated actions that people could take in support of the Myanmese.

Other social networking sites like MySpace also had similar set-ups, although they were not as extensive as Facebook's, nor did they recruit as many members.


The role of Web 2.0 in the support for Myanmar was not insignificant. Some of the critical elements were:

The blogger who achieved the highest profile was probably Ko Hitke, who was interviewed by both the BBC and CNN.

CNN discussed the impact of Myanmar's cutting off Internet access at:
http://www.cnn.com/2007/WORLD/asiapcf/09/28/myanmar.dissidents/
In another article, http://edition.cnn.com/2007/WORLD/asiapcf/09/27/myanmar.dissidents/index.html, CNN highlighted Htike’s blog as one of the few information outlets for news from within Myanmar. His blog received inputs in the form of eye-witness accounts as well as videos from as many as 40 people in Myanmar. View CNN report here Blogs Helping Expose Myanmar Horrors

This prominent coverage recognized the impact of blogs.

These blogs and social networking sites also gave rise to protests, demonstrations and petitions. As an example, Facebook’s group "Support the Monks’ Protest in Burma" highlighted events, and its efforts were also publicized in reports by CNN and the BBC. The BBC reported that 3000 people turned out for a demonstration in London following a call to action on Facebook http://news.bbc.co.uk/2/hi/uk_news/7020956.stm

Chris Vallance on the BBC Radio 5 Live "pods and blogs" site commented, “Again, this is quite a cultural change. ..When news breaks Blogs, Social Networks and Video Sharing sites are going to become must-check sites for journalists.” In the article http://www.bbc.co.uk/blogs/podsandblogs/2007/09/burma_and_the_bloggers_1.shtml, he added that some groups on Facebook were also encouraging people with information to send it to the BBC.

Many people from within Myanmar were also posting updates to mainstream media like the BBC. By incorporating these inputs and encouraging the public to send them in, the mainstream media is also actively using new media applications to augment their news reporting. http://news.bbc.co.uk/2/hi/asia-pacific/7011884.stm

Bloggers were also drawing from the online community, posting Youtube videos and hyper-linking other articles that they found informative. An example could be found at http://www.globalvoicesonline.org/2007/09/26/myanmar-updates-from-26-september/

It was also interesting to note that the Burma Watch blog originated from the "Support the Monks’ Protest in Burma" group in Facebook. These sites provided mutual links, and helped like-minded individuals and communities to form a network of communities. This interweaving of networks stimulated exponential growth, as more related information was pooled and shared.


While the Myanmar situation had not been resolved at time of writing and appeared to have reached an impasse, it is believed that Web 2.0 has had an impact. For instance, the Myanmese Government acknowledged the impact of these efforts by shutting down all Internet service providers within Myanmar. Mainstream media also fed off these sites and raised awareness through traditional coverage. These sites have also sought to provide avenues to petition national leaders. Governments are expected to also track these sites to gauge public concerns and sentiments.

While it is difficult to prove a direct causal impact, it was highly probable that the awareness and attention created by the various participants in the Web 2.0 space helped to shape international attention and action towards addressing the Myanmar crisis.

It may be appropriate to close with a video commentary posted by a Burmese-American: