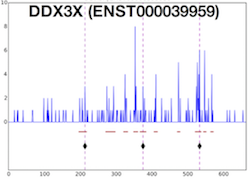 Cancer and developmental disorders (DDs) share dysregulated cellular processes such as proliferation and differentiation. There are well-known genes implicated in both in cancer and DDs. In this study, we aim to quantify this genetic connection using publicly available data. We found that among DD patients, germline damaging de novo variants are more enriched in cancer driver genes than non-drivers. We estimate that cancer driver genes comprise about a third of DD risk genes. Additionally, de novo likely-gene-disrupting variants are more enriched in tumor suppressors, and about 40% of implicated de novo damaging missense variants are located in cancer somatic mutation hotspots, indicating that many genes have a similar mode of action in cancer and DDs. Our results suggest that we can view tumors as natural laboratories for assessing the deleterious effects of mutations that are applicable to germline variants and identification of causal genes and variants in DDs.