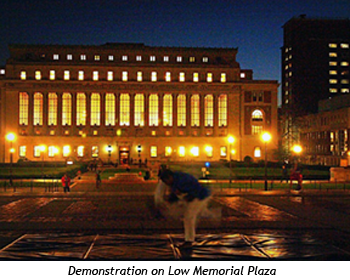 Columbia University Club Judo (CUCJ) is an undergraduate-driven group that operates out of Dodge Fitness Center on the Morningside Heights campus. Membership is open to any Columbia University student, faculty, alumni, or affiliate with a valid Dodge Fitness Center Membership. Practices are on Sundays from 4-7PM and Wednesdays from 9-11PM in the Dodge Wrestling Room on the bottom floor, near Levien Gym and Uris Pool.

So, what is Judo? Judo is a Japanese martial art founded by jujutsu master Jigoro Kano in 1882. It falls under the broad category of grappling (non-striking) art, along with wrestling, Brazilian Jiu Jitsu, Sambo, and Aikido. Its approach to grappling does not use force to overcome an oncoming force- rather, it teaches that it is more efficient to move with or around an opponent to gain superior position to apply a technique. Because the element of strength is not necessary (though it is useful), its utility applies to all body types, genders, and levels of athleticism. There is a large emphasis on randori or free sparring, which is meant to create familiarity with how techniques work against a resisting opponent.

Techniques permitted for use in competitions include throws, joint locks, chokes, and pins. These techniques have also proven themselves applicable for self-defense purposes and thus have been adopted in Krav Maga, the Marine Corps Martial Arts Program, and by the Japanese police. Here's a good video from the IJF, for an example of what Judo looks like:

Judo has over a century's worth of history at Columbia and at one point Columbia had the oldest, continuously-running collegiate Judo program in the United States. Its popularity and long tenure led to the creation of a Judo gym elective (currently taught by Sensei Yoichiro Matsumura, 8th dan). Martial arts are experiencing a revival on campus, with each club growing in membership each semester. Be part of this growth and join us for a class!