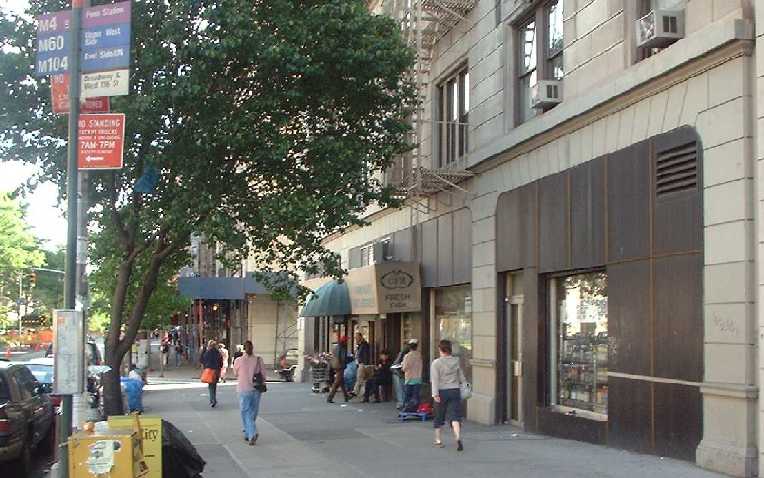 Broadway and West 115th Street, New York City, facing the Columbia University campus directly across Broadway. (This section was written prior to the change of ownership.)

A deli of some sort has had the corner spot on this block since who knows when. About 1957 whatever deli was there at the time (name?) was purchased by the family of the present owner, Charlie Pastor, and called Ta-Kome, "Home of the Hero" (left). Until 1986 it was a single-width establishment, only 25 feet wide, one of the most crowded spots in town. To its right was Salter's, a huge, ancient, cavernous, dusty book store specializing in Columbia course and/or used books (they'd sell you a new book for $30 and buy it back the next day for ten cents, and sell it the next for $29.95). (And to Salters' right, for a couple years, was Ta-Kome II, a Ta-Kome satellite that sold takeout hamburgers and french fries).

When the Salters finally retired about 1985, Ta-Kome got the space, expanded to fill half the block, and renamed itself University Food Market (UFM), since now it was indeed a supermarket as well as a deli. Instead of one cash register there were six, plus aisles and counters galore, and about 40 new jobs were created. UFM is the primary source of calories for the neighborhood and still one of the most crowded spots in town, especially since absorbing the legacy of Mama Joy's (a long-lived Italian deli just down the street, closed in 2001 after more than 50 years), and even more while D'Agostino's supermarket on 110th Street was closed for a year in 2002 for construction of "The School".

(Latest news at the bottom...)