In the rush to be always modern and up to date, the first thing we discard is old computer books, manuals, and documents (not to mention old computers). By now the world is so dependent on computers and networks that all commerce would cease if they disappeared or stopped working. Anything this important deserves to have a paper trail showing how it came about. Not just that, but because computing has been an important factor at Columbia University since the 1930s, and in much of the world since the 1950s, we need to have knowledge of old formats, media, encodings, architectures, and languages to decipher, evaluate, or resurrect computer-based work from years past. Not unlike the work archaeologists do... some of the material in this collection could one day be a new Rosetta Stone. For this reason I believe it is unwise to be so quick throw out old computer manuals, standards, character-set specifications, and so on.

I believe that the items listed here have historical significance or other value and deserve to be kept available, ideally findable by library catalog search and available both on and off campus (e.g. by interlibrary loan). Some items are extremely rare, some are very expensive, many are just old, but all have played a part in the history of Columbia University and to varying extents in the history of computing in general. As of August 2011, most of this material has been deposited in:

All other items (the ones marked [] in the box list below, plus most of the artifacts) went to the dumpster in 2013. 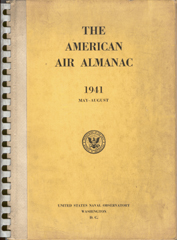 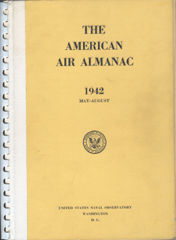 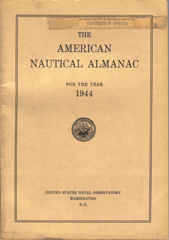 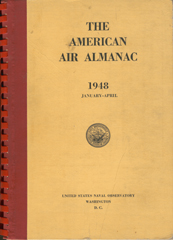 Columbia Professor Wallace Eckert directed the US Naval Observatory Almanac Office during World War II, creating the almanacs used for all military and civilian air and sea navigation by means of automated calculation, techniques that he developed at Columbia, thus increasing the speed of production of the almanacs and completely eliminating errors. At the end of the war he returned to Columbia to found Watson Lab. Eckert is a forgotten pioneer of computing who deserves wider recognition at Columbia and in the world. Also see the Eckert career overview here along with an extensive bibliography. Also see Box 3 for copies of his correspondence and many of his papers.

Other Books that Discuss Kermit [Box #12]

Other Kermit Publications and Articles [Box #13]

Articles about and announcements of Kermit software from the trade press, user group and university newsletters, training catalogs, etc. Loose.

This is in addition to whatever is in Box 8. Manila folders containing correspondence, proposals, discussions, specifications of new features, documentation of other protocols we looked at and rejected before designing Kermit, history of various specific Kermit versions, the 1984 Kermit articles in BYTE magazine, Kermit adaptations for blind people and deaf people, Kermit adaptations for transfer of Japanese, Hebrew, and Cyrillic text between unlike platforms in the pre-Unicode days. Adaptation of Kermit by IBM for its PC networking product. Original unopened shrinkwrapped copies of Kermit 95 in its three different packages. Also:

TCP/IP and Other Networking Texts [Box #9]

Of the hundreds of computer operating system that abounded from the 1950s until about 2000, all but two or three have, for all practical purposes, vanished from the scene. One of the survivors is Bell Laboratories' UNIX. Although Columbia had no direct hand in the development of UNIX, the system has had a continuous presence here since the 1970s, and the programming language of UNIX, called C, has driven out the myriad other languages developed since the 1960s, and is, therefore, used and taught at Columbia. Box 19 includes some historic and/or definitive publications relating to UNIX and C, and to some other developments at Bell Labs.

SNOBOL is a unique text-processing language developed at Bell Labs around 1970 and well into the 2000's still has many fanatical adherents because it does things that no other language can do, and does them fast. For decades people have been trying to recreate the magic of Snobol and the best they can come up with is regular expressions, which are practically impossible to use, read, or understand, let alone to get any useful results out of them. SNOBOL was widely used at Columbia in the 1970s, both in systems programming and in CS courses. SNOBOL is a pun on COBOL; SPITBOL is a pun on SNOBOL. (And SITBOL, the version from Stevens Institute of Technology (S.I.T.) that was used on Columbia's DEC-20s, is a pun on SPITBOL.)

International Telecommunications Union. All paperbound, blue, 8¼×11¾". If I'm not mistaken, this set of volumes cost about $4000.

This material will be essential for decades or centuries to come for deciphering computer text from the 1930s through about 2000.

Most of these are listed in terminal manuals or OS manuals. IBM was one of the few companies that devoted serious publications to its character encodings. The manuals in this section were published for IBM internal use only.

This material, too, will be essential for decades or centuries to come for deciphering computer text from the 1930s through about 2000.

Unicode is the universal computer character set encompassing all the world's scripts and writing systems, replacing the hundreds or thousands of different and incompatible text encodings used on computers throughout the 20th Century with a single universal encoding, now the predominant coding in the Internet, in Windows, and in Unix. Columbia University (the Kermit Project) was a member of the Unicode Consortium and played a role in the development of Unicode, and was an early implementor of Unicode support in its Kermit software.

Digital Equipment Corporation (DEC) had a strong presence at Columbia University in the 1960s, 70s, and 80s beginning with the PDP-4, PDP-7, PDP-8, PDP-9, PDP-11, PDP-12, and other minicomputers in the departments, and later VAXes as well as desktop computers and word processors. In the Computer Center the first campuswide timesharing was offered from a PDP-11/50. Then followed four DECSYSTEM-20 mainframes, plus two more in the departments, and finally a VAX-8650 and then a VAX-8700 mainframe, until finally Digital ceased to exist. Our first campus network (besides the IBM 3270 terminal network) was DECnet. The PDP-10 line (DECsystem-10 and DECSYSTEM-20) played a key role in the development of the ARPANET, which was to become the Internet, and was the birthplace of many ideas and applications that live on to this day.

These are 5¼×8" paperbacks that were given away. Most of of these are for the extremely popular 16-bit PDP-11 minicomputer line; these computers were installed in the Computer Center and many Morningside and Medical Center departments in the 1970s and 80s.

Including some non-DEC software that ran on the DEC machines.

The first four items are seminal papers in the groundbreaking design of TENEX (which was to become TOPS-20). The sales brochures before 1977 were used in our decision of machine to adopt as followon to the PDP-11 (the choice came down to DECsystem-10 or DECSYSTEM-20).

Manual sets for other operating systems (not boxed)

These were all used in the development and support of Kermit software.

For terminals that were in wide use at Columbia and/or that are emulated by MS-DOS Kermit, Macintosh Kermit, or Kermit 95 for Windows. These are original published manuals unless otherwise indicated. Of these Jeff Altman, Kermit Project, 1993-2003, says:

One of the things I enjoyed most when working on Kermit was the ability to travel the world and meet users wherever I went. Frank, and to a lesser extent myself, acquired a large number of manuals, terminals, software, and computers and more that by the time they came into our possession were already facing extinction.

After my departure from Columbia University in 2003 Frank was forced to scrap a large number of items because my office space was no longer available for storage. Some of the equipment which was destroyed in that purging were military terminals whose manuals were labeled top secret. They came into my possession on a drive from Charlotte NC to New York through Virginia where a concerned soul literally met me behind an abandoned warehouse and the machines and manuals fell off the back of a truck into my back seat.

I am particularly concerned about the loss of the early and rare terminals because in my time working with them I found the manuals to be frequently lacking in accuracy. The only way to know how the actual terminal sequence parser would behave was to write test sequences and pass them through the physical machine. The manuals were nice to have but without the terminal, an accurate emulator could never be developed.

CLICK HERE to see the terminals that were sent to the dumpster in 2003.

For terminals that were in wide use at Columbia...

This is Columbia University's main telephone system on the Morningside campus, installed in 1988 and with no plans to remove it even in 2011, even though most new phones being installed are netphones.

Don Knuth was arguably the best-known figure in computer science in the 1970s and 80s, and his Art of Computer Programming series was (and is) a classic. He came to Columbia in 1980 to give a series of lectures on his 10-year detour in completing that series, when he found it necessary to computerize the art of mathematical typesetting that had been lost since the publication of his first editions, the result being TEX and METAFONT, presented in the following volumes:

These are the original 5¼-inch and 3.5-inch diskettes that were sent to us by programmers all over the world with their contributions of source code, binaries, documentation, and utilities, plus examples of some of our own distribution diskettes, and diskettes prepared for Kermit classes, plus various utilities (assemblers, editors, commercial or shareware communications programs that included Kermit protocol such as Crosstalk). Some examples:

MOST OF THESE ITEMS ARE IN THE BOOKCASES OPPOSITE THE WATSON LAB 6TH FLOOR CONFERENCE ROOM AND MAY BE CLAIMED BY CUIT PEOPLE OR ANYONE ELSE WHO WANTS THEM. 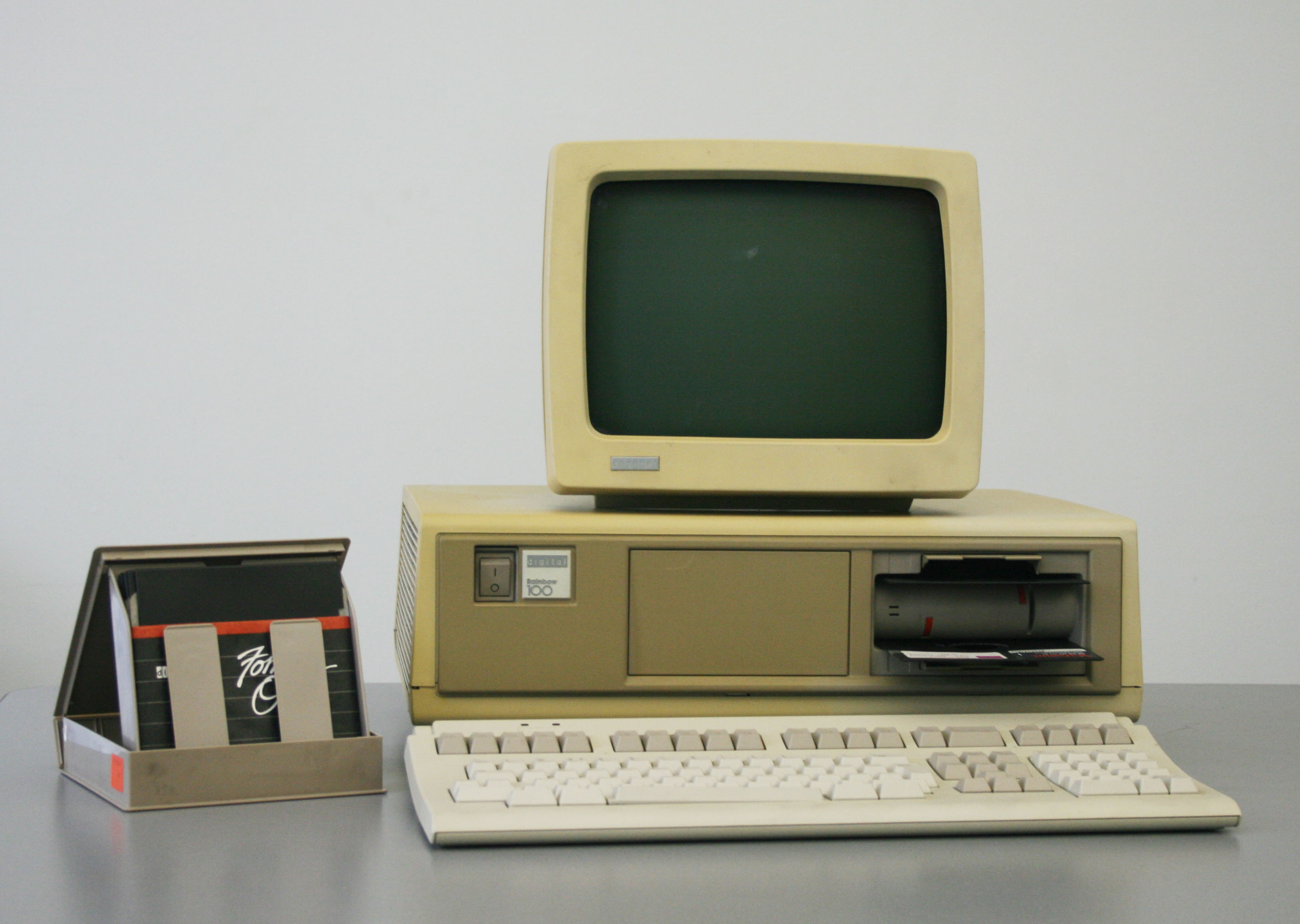 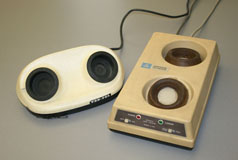 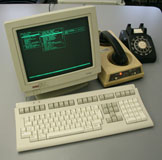 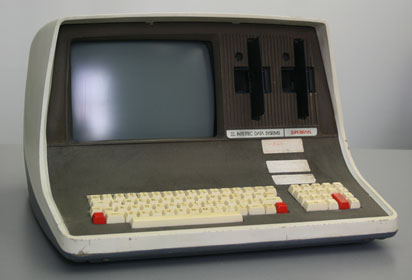 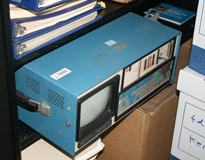 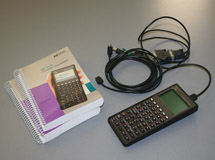 Due to lack of space, very little computing equipment has been preserved at Columbia. For example, no trace remains of the early DEC minicomputers such as the PDP-4, PDP-7, PDP-9, PDP-12, and PDP-15 that were once found here, not mention the more common PDP-8s and PDP-11s; nor the SEL, IMLAC, Data General Nova and Supernova (I remember all these), and who knows what other kinds of early minicomputers, and certainly not the much larger IBM and DEC mainframe computers, nor the earlier IBM punched-card equipment, nor any of the groundbreaking machines that were built at Watson Lab in the 1940s and 50s. Even the smaller relics have mostly disappeared. I remember, for example, when I first came to Watson Lab the building was littered with IBM control panels, but later when I tried to find one, they had all vanished. Anyway, I managed to keep a few things:

And finally here is my menagerie for building C-Kermit on old platforms, in the ex-IBM Watson Lab building on 115th Street in NYC. In this picture you can see: